Showing posts from June, 2011
Show all

June 29, 2011
Hi, Pastor Coon here.   This is my first blog either writing or reading.   So, here we go.   I will start where Alex left off.   We have not been able to connect to the internet because much of our time after Sunday has been spent here at the center and the internet service here is still out of order.   We apologize to those of you that have been eagerly waiting for news from across the pond. Monday through Friday morning is spent in camp.   We get up at 7:00am to get cleaned up and dressed.   Some are just getting dressed.   We then have two breakfasts.   One with just the team and the other with the campers.   The reason for two, you ask?   The camper’s breakfast is not very appetizing.   They have toast with warm milk poured over it.   Chad can’t take it so we have our own and then just make an appearance at the other.   Chapel   is at 9:30am.   Susan plays the keyboard while “Vickie” leads the songs.   The kids all sing great.   This is followed by a story by a lady that is absolu
Read more

June 26, 2011
Hey this is Alex; I just wanted to let you know that we made it here all safe. It was my first plane ride and it was awesome! However, jetlag is not too much fun. Yesterday we arrived at around 8:30 a.m. and on our way into customs we saw team 1 through a Plexiglas window, and that was very exciting. We defiantly received some very weird looks from the people walking by us as we raced towards the window to press our faces up against it to converse with the other team.   Then we met the Handersons at the airport, they took us into the Center where the camp will be held so we could get settled in. Next, we had to clean up the Center by mopping and sweeping the bathrooms, carry mattresses to the second floor, and bring in the food to the kitchen. We then had lunch and all of us were very tired and wanted to sleep, but the Hendersons made us stay up because of the jetlag. To help, they took us to town to shop and later to the mall for dinner. Finally, we had made it back to the Center and
Read more

June 24, 2011
It has been a fulfilling experience, but nothing like we had planned. God has had a different plan for us almost every day, but we are now getting in step with His plan for each day. Today (Friday), we are going to Cascais on the coast, going down the "Marginale" which is a coastal road, doing some last minute shopping, and then having a typical Portuguese meal for lunch. Then it's back to the parks in Arruda (pronounced "a-who-duh") and Loures (pronounced "loh-dish"). The park ministries have been different almost every day, depending on what school children are in the park. Yesterday was a great team effort, with everyone doing a little part of the outreach to a family whose young father (Reuben) is Portuguese and whose young mother (Katia) is Russian. They had two small children, both four years old or less. Fortunately for all of us, they both speak English, so we were able to talk with them for quite a while about the Gospel of Jesus Christ. Ple
Read more

Olá, Church family and friends, We (team 1 to Portugal) are currently in Portugal, as you likely already know, and it’s been an eventful few days since we’ve last updated you.   Let’s see…I’ll now update you on events on Sunday, Monday, and today, respectively (though today is far from over).   Sunday:   On Sunday, we went to a couple of churches in the area.   The first church, which we went to in the morning, was in Loures (pronounced Lorish), and is called Igreja Batista De Loures.   This church started its morning with a worship time, then split up for Sunday School (adolescents, which here means teenagers; and jovens, which as far as I can tell is a young adult class).   During Sunday School (at least in the adolescents) class we shared testimonies (with a translator), as did a couple of the Portuguese teens (and there were only three in the class in the morning).   After Sunday School, there was an intermission (mingling time, as well as pastry type stuff…kind of like our doughnu
Read more

A Whirlwind of Portugal 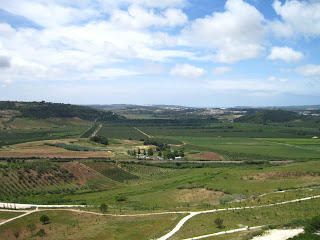 We landed in Portugal on Thursday morning and since then have had three full days of sightseeing. Thursday we toured the village of Obidos. It was an amazing view. We learned how God had moved the mountains to make what was once this port city fifteen miles away from the ocean (due to earthquake in 1757). Thursday was a great day, although it was a struggle for all of us to stay awake. However, the Hendersons did their best to keep us awake by taking us to Obidos, and showing us the views. It was hard to stay alert, but we have adjusted to the time difference very well because of it. Friday was a full day touring all over Lisbon. We visited The Discover's Monument that was built in 1960, and that our very own Jerry Carpenter was part of (as a sailor in port there at the time, he was asked to march in the parade dedicating it). It was a very moving experience for all of us, but especially for Amy who is here as part of the team. Believe it or not, we were cold that afterno
Read more

June 16, 2011
THEY ARE HERE!  All of the members of Northeastern's missions team arrived safely, with no problems other than lack of sleep.  All baggage arrived safely as well.  Thank you for your prayers - keep them coming!
Read more

Meet the Teams - Above you see 15 individuals pictured who willing be joining us in ministry in Portugal. Team #1 arrives Thursday, June 16 and will be conducting VBS clubs in two different community parks. Team #2 arrives on Saturday, June 25 and will be providing crafts, games, testimonies, and music in a 5-day camping adventure.  Both teams will also be doing work projects for our local church in Arruda and the Lisbon Training Center. Please pray for the effective ministry and safety for both Teams. They have done much work to prepare, including learning to sing in Portuguese!  Now the results are up to God - and as always - it is in His hands. Thank you for your prayers.
Read more
More posts

Rod and Susan
Centennial, CO, United States
After over 25 years in the secular workforce, God called the Hendersons to serve as ABWE missionaries. They served in Portugal from 2009 - 2018, at which point God called them to serve at South Holly Church in Centennial, Colorado. Both Rod and Susan serve full-time at South Holly - Rod as the Associate Pastor of Outreach & Operations, and Susan as the Executive Administrator.

We are ABWE missionaries. Everything on our blog represents our personal experiences or opinions; these are not necessarily the views of ABWE.